A local landlord has pleaded guilty of four counts of breaching a Criminal Behaviour Order and told to expect to pay a significant amount of compensation and costs. 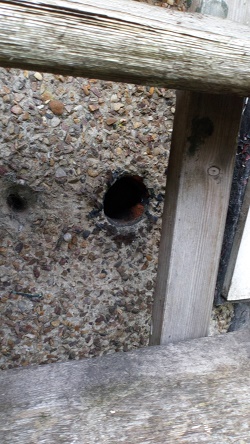 For a number of years, we have been working with residents and landlords on the West Lea estate in Clowne to help improve the area, which included extensive enforcement actions for rubbish on gardens and the poor conditions of privately rented housing.

During inspections, our officers found one of Mr Ambler’s properties was infested with rats and due to the major defects found, the rats continued to gain access to the property.

Droppings were found on a mattress, a child’s artwork had been chewed and the rats had even chewed through a water pipe causing a significant leak.

This family home contained numerous category 1 hazards (posing the most serious risk to health) and disrepair included holes in walls, gaps in windows that were falling apart, doors that didn’t close properly and external doors which allowed wind and water ingress. Mr Ambler failed to rectify the issues despite the Council’s repeated requests and his obligations under the Criminal Behaviour Order.

At another property owned by Mr Ambler, he failed to remove large amounts of fly tipped refuse from the gardens and council officers also found Mr Ambler was letting a property with metal shutters attached to the windows.

Cabinet Member for the Environment, Councillor Deborah Watson said the Council had been working hard to improve this area of Clowne for a number of years.

“We have, and continue to talk to local residents and landlords about improvements to make this estate a better place to live and we are starting to make progress. But when dealing with a landlord like this who did not take his responsibilities seriously, there was only one course of action we could take. The state of the properties was appalling and no-one should have to live in such dreadful conditions. He should be ashamed of himself.”

At the sentencing hearing on Monday 8 August 2022 at Derby Crown Court, Judge Bennett addressed Mr Ambler and said, “You are what is referred to as a ‘Rogue Landlord’ and have a cavalier approach. The gaps in the windows, the pipes which were damaged by rats were your responsibility and you were taking in money paid by the taxpayer through housing benefit."

Councillor Watson added, “We regularly work with landlords to help them provide good accommodation for their tenants and help them keep up to date with new regulations and changes in the law. The majority of our landlords are good, but there are a minority who think they are above the law and can do what they want. Well they can’t and we will continue to monitor private landlords for the benefit of our residents and take any appropriate action where necessary.”

Judge Bennett deferred sentencing until 6 January 2023 and Mr Ambler was ordered to:

Judge Bennett said if he successfully manages the terms of the deferment, he would suspend a prison term he was thinking about imposing and advised Mr Ambler to set aside substantial money for compensation and costs. Mr Ambler was handed bail until 6 January 2023 and the existing Criminal Behaviour Order has been extended for the same time period.